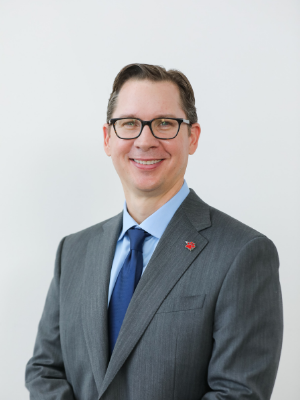 William Silveira grew up in Mendota, where he often worked on the family farm, shaping his view of the needs for the San Joaquin Valley. He attended Fresno State with interests in mathematics, agriculture, engineering and science — particularly curious about the science behind the chemistry and biology he observed in agriculture.

“I always had in mind that I could explore and find the right major at Fresno State.”

Silveira ultimately majored in chemistry, which he found fascinating and tied into all branches of science. At Fresno State, he became a scientist, working with “amazing faculty,” who helped mentor him in his decision to pursue a graduate degree in physical chemistry. He remained hopeful to someday use his abilities to give back to the Valley.

“Growing up in the Central Valley, I always knew how hard people worked, yet often had so little, especially when it comes to health care…I always wondered, ‘How can I make my community a better place?’”

Silveira graduated with a degree in chemistry from Fresno State in 1999. He went on to earn master’s and doctoral degrees from Cornell University, where his research in physical chemistry focused on charge conduction in organic molecules and polymers, including nanofabrication.

While he was a graduate student at Cornell, Silveira became open to the idea of medical school to connect his passion for science to his desire to work directly with people. As a volunteer in a small emergency department, Silveira realized he truly enjoyed working with people, but remained unsure if medical school was the best path given his commitment to basic science research at Cornell.

“One night, I made the decision to attend medical school while volunteering in the emergency department. As I helped an elderly patient walk down the hall, she said, ‘You’re going to make a great doctor.’ I realized at that time what I needed to do.”

Silveira completed his Ph.D. at Cornell University in 2005 and then graduated from Harvard Medical School in 2009. He moved back to California to complete his residency at UC San Francisco, specializing in radiation oncology, a specialty that combined his interests in the physical sciences and oncology. He had become a physician-scientist.

“When someone is diagnosed with cancer, it pulls the rug out from underneath them, it’s a defining point in a person’s life…I go through the imaging and science and staging of it all, but I always stop at the end and ask, ‘how are you doing with all this?’ And we try to address anxiety and depression…You see a strength come from people when they’re diagnosed. They come to grips with it…and you really help them by being their friend and the bridge between all this technology…and all these treatments that sound so scary…The job of an oncologist is really to be that human bridge between all of this technology and science and the human being who has to put themselves through this to kill their cancer.”

“I see patients who are potentially curable and patients who are not…the cure rate can range anywhere from 10 to 90 percent depending on the site and stage. Many times, I meet new patients with Stage 4 cancer, and what we are trying to do is control their cancer, give them quality time and alleviate suffering. A very satisfying part of my practice is treating metastatic sites within the bones or the brain or anywhere that’s causing some degree of suffering…to help someone who knows that at some point this cancer is going to cause them to pass away.”

Silveira served as the medical director for Community Medical Centers’ Department of Radiation Oncology in 2017 and continued for 4 years until May 2021. He played a key role in the development of the new institute, with new cutting-edge imaging including a dedicated PET/CT and MRI for cancer imaging as well as an updated CyberKnife platform for radiosurgery to treat tumors in the most difficult locations. He also introduced a new cancer-fighting technology, Optune, for a brain tumor known as glioblastoma, to the San Joaquin Valley. He also is a member of the Community Cancer Institute’s Oncology Advisory Board, which seeks to continue to elevate cancer care and research in the San Joaquin Valley.

Silveira remains dedicated to education, and he is currently an active member of the advisory board for Fresno State’s College of Science and Mathematics. In addition to his practice, he is also a volunteer assistant professor at UC San Francisco, training and mentoring students, residents and fellows at UCSF Fresno.