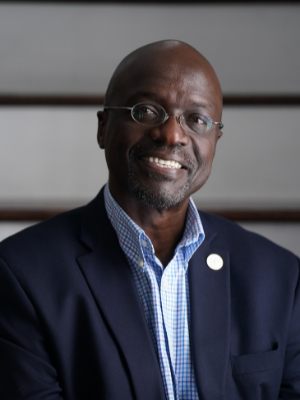 Prior to helping the United Nations’ World Food Programme win a Nobel Peace Prize, Dr. Steven Were Omamo was one of 16 siblings in a family with a sugarcane farm in western Kenya.

For a time, Omamo’s parents were the largest private family sugarcane farmers in the country, and his father also worked in different agriculture-related positions in the government. Omamo was expected to work on the family’s farm after he went to college. He said, “Fresno State was recommended to me by a high school counselor. My father approved of it given his knowledge of large-scale California agriculture.”

Omamo arrived in Fresno in summer 1982. He was greeted by John and Elizabeth Shields, professors in Fresno State’s Jordan College of Agricultural Sciences and Technology and the Craig School of Business, respectively, who served as his host family. The Shields’ helped Omamo get settled, encouraged his academic pursuits and even helped him go clothes shopping and lease his first apartment.

As a student, Omamo jumped from agronomy to food nutrition to biochemistry before deciding to major in agribusiness. “It really ended up being a perfect major for me…it had grounding on the production side, so you did need to take some courses in animal production, agronomy, all of those things…. The professors, they were very down to earth, real people. So I came back to agriculture with excitement and interest, and then, when I finished, the expectation was that I would be going back to the family farm. But before I left, I realized I wanted to go to grad school.”

“I applied and then as fate would have it, as I’m returning home, I did get some acceptances. So there really was a choice — do I go into the farm and dive in and that would have been my life? And my father being who he was — he valued education so much — said, ‘No, you keep studying.’”

“I’ve always had this sense, and I think it comes from my family, that there are challenges in the world that require some kind of public action. Even though we were in the private sector as a family, my father had one foot in the government…he and my mother always had many people they were supporting, so this sense of being part of a community was key.”

“Agriculture is…it's not a theory, it's really something that families are built on; but also something that needs attention and improvement from the public sector. I think that's been the theme of my career — so I went from getting a Ph.D. to teaching, into international agricultural research and development, and then more recently to the front line of humanitarian work.”

Omamo joined the United Nations’ World Food Programme in 2006 as chief of social protection and livelihoods. He worked with World Food Programme for the next 15 years in a variety of roles, including: chief of food security and safety nets, deputy director of policy planning and strategy, coordinator of food systems strategy and deputy director of policy and programme.

From 2018 to 2021 Omamo served as World Food Programme’s representative and country director to Ethiopia. In this role, Omamo led actions and partnerships in addressing hunger needs related to emergencies, natural disasters, pest and disease outbreaks and conflicts in Ethiopia, overseeing programs that work with government agencies, suppliers and transporters to boost food security for an average of 8 million people each year.

Along with his team in Ethiopia and colleagues across the world, Omamo’s work was recognized when World Food Programme earned the Nobel Peace Prize in 2020.

“I moved from being a policy developer and implementer to this frontline operational role, and that progression was very helpful. When we were awarded the Nobel Peace Prize, I could understand why — because the people of World Food Programme are quite unique in their bravery and commitment to do whatever it takes to get food to people who need it…they’ll work all hours, with a smile and that can-do spirit… they’re really inspirational to me.”

Omamo has long sensed the potential in addressing hunger not only from a crisis-response perspective, but also from a proactive and forward-looking, “transformative,” one. At the end of 2021, hoping to help realize that potential, he returned to New Growth International, a consulting firm he had founded in 2007. New Growth International provides policy, strategy, evaluation, capacity development and training services to clients, with a focus on agrifood and education industries in Africa.

“New Growth International, as  suggested  by the name, is about transformation and helping clients, countries, governments, NGOs, foundations and the private sector deal with transformation in innovative ways to promote food security [and] sustainability in the food system.  I want to devote what I think will be the best years of my career, God-willing, to that transformation narrative.”