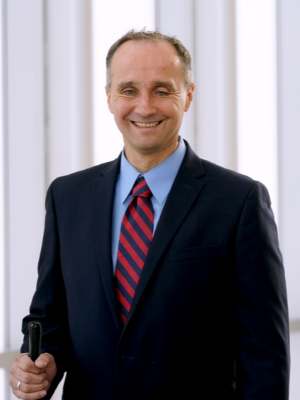 Sabahudin Tricic grew up on a small family farm in Bosnia. He avidly trained in karate, and left home in 1990 to study mechanical engineering in Sarajevo, Bosnia’s capital city. But his life quickly changed as war broke out in 1992, and he lost his eyesight after being struck by shrapnel from a grenade.

Because Tricic was in an area that had no electricity, he said his only hope was to flee the country. He traveled to Germany and was then transported by the International Organization of Migration to Madera, where Dr. Arain was treating Bosnian refugees.

Tricic’s wife joined him a month later, and served as his translator as he met with doctors and went through multiple eye surgeries.

Tricic said, “At the end of the surgeries, when everything’s settled down, we needed to decide: do we go back to Germany, or do we stay here and fight for us to go forward? We decided, if God put us in [the] United States of America…if I could make it, it could be there. So we decided to stay. I’m [wanted] to learn English and enroll in college as soon as possible.”

Both Tricic and his wife enrolled at Fresno City College, where they completed their general education classes, and then transferred to Fresno State. With the help of his wife, professors and Services for Students with Disabilities on campus, Tricic completed a bachelor’s degree in computer science in 1999.

At the same time Tricic was learning English and pursuing his degree, he returned to karate, allowing him a familiar and safe space to reconnect with his body and senses after losing his sight. “I was a brown belt, [but] I took off my belt and said, ‘This is a new beginning, a new way to do things. I will start from yellow again.’ And I took all of the belts again. Karate helped in different ways — in my balance, concentration, motivation.”

Tricic has excelled with karate since reclaiming his belts, winning medals for Team USA, teaching classes, offering seminars to other senseis so they can learn how to work with visually impaired students, and sponsoring young Bosnian athletes so that they can compete in the U.S. Open Karate Championships.

After earning his bachelor’s degree, Tricic sent out almost 300 applications and got no responses. He finally landed an interview with Microsoft and made it to the second round, but ultimately wasn’t offered a position with the company. The experience caused Tricic to return to a philosophy he’d held onto since losing his eyesight. “To come to [your] destination, you simply have to stand up, dust yourself off and go forward.”

Tricic enrolled in a graduate program at Fresno State, and graduated with his master’s degree in computer science in 2006. Tricic has succeeded in his career in two fields: business and education.

He founded his own company, Thyme Systems, LLC. Initially the company created websites, and has since grown to be an international software development company that addresses unique concerns for various businesses.

While managing all operations of Thyme Systems, Tricic also works as an adjunct professor of computer science. He has taught at multiple online universities, working mainly with nontraditional students: adults changing careers in an attempt to improve their lives; service members transitioning to civilian life; and disabled students searching for a new path.

Tricic, who is currently teaching with Grantham University, has received numerous awards for his teaching, and has also become involved in designing curriculum.

When asked what he envisions for his future, Tricic said, “Next on the list is a karate medal for the world championship….[and] I’m going to stay in teaching. I like teaching. I’ll be teaching as long as I can.”