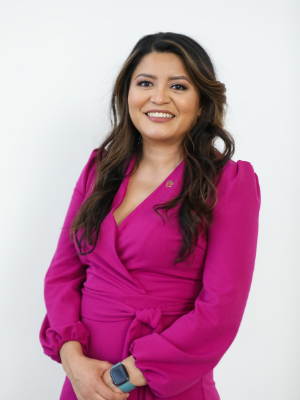 Born in El Salvador, Ana Jovel Melendez came to the United States when she was 8 years old, reuniting with family already in the U.S. The family made Fresno their home, and Ana started learning English and adjusting to her new environment. She said, “It wasn’t as difficult as you might imagine, because I was a kid and kids are resilient.”

One of the biggest changes Jovel Melendez’s family made upon settling in the U.S. was a pursuit of education. In El Salvador, it was not common for people in her grandparents’, and even her mother’s, generation to get an education past the sixth grade. However, in the U.S., Jovel Melendez’s mom became the first woman in the family to earn a university degree. “She graduated from Fresno State and became a teacher…I think I had the support to then, myself, go on to higher education, and I would say I felt very supported in that way.”

Jovel Melendez graduated from high school and already knew that she wanted to study political science in college. “There was no question about it…I did have to grow up a little bit too fast because of the environment [in El Salvador]. I think now, looking back on it, that I always knew that politics and government affected my life, certainly, and that of others in very, very direct ways.”

As a student at Fresno State, Jovel Melendez became very involved on campus, helping to restart the Political Science Association, which had been a dormant student club for years. Jovel Melendez served as the vice president of the organization, which hosted voter registration drives and invited political candidates to campus for debates and forums.

During her junior year, Jovel Melendez applied for an internship through the Maddy Institute, and she had the opportunity to work in Assemblymember Sarah Reyes’ Fresno office for a semester.

The Maddy Institute continued to open doors for Jovel Melendez, who was able to work in Washington D.C. as a Leon and Sylvia Panetta Institute Scholar during her senior year. That same year, Jovel Melendez was also named a Ronald E. McNair Scholar and a Sally Casanova Fellow for her outstanding scholarship.

Upon her graduation in 2005, Ana continued her public service.  “I was hired at U.S. Senator Barbara Boxer’s office right out of college. I gave them a two-year commitment, and that became nine and a half years.”

Jovel Melendez became the state projects director in Boxer’s office. “Really, [it] was about communicating with all of her staff statewide and in D.C., and also coordinating all of the different politics and policy priorities in the state…It’s a big state and we have a lot of different perspectives and priorities, people with different backgrounds. You have to find a way to balance that and understand how policy affects people’s lives and communicate those impacts back to our D.C. colleagues who were working on legislation and to the senator, of course, so that she was aware of what her different constituencies were thinking.”

As state projects director, Jovel Melendez contributed to policy issues that helped with communities impacted by the 2009 recession, the adoption of the Affordable Care Act and the Consumer Financial Protection Act.

Jovel Melendez returned to Fresno State in 2014, serving as the deputy director of the Maddy Institute. She oversaw the creation of a graduate fellowship to help graduate students pursue their degrees, and founded and hosted the Spanish version of “The Maddy Report,” “El Informe Maddy,” which made information about public policy, legislative agendas and community programs more accessible to Spanish speakers and immigrant communities.

In 2016, Jovel Melendez then went to work for the office of Assemblymember Joaquin Arambula. She was initially his district director, and later became his legislative director.

“It was really critical for us to understand how the policies that we were working on affected [people’s lives]. If you look at the district…the San Joaquin Valley community, we do have a lot of rural communities. There are some definite gaps in wealth and equity. We have a lot of disadvantaged communities, lots of people from various economic and ethnic backgrounds and educational backgrounds — so trying to create those opportunities for them is really critical. Trying to make sure they’re connected to resources no matter their background, no matter what work they do, whether they’re a nurse or someone who works in an automobile shop or a farmworker. It’s key for everybody to have the same opportunities. I see that as my role — working for elected officials and trying to make sure we’re not losing sight of people and what they’re going through, and, hopefully, making life a bit easier for them.”

In spring of 2021, Jovel Melendez became the director of legislative affairs for the State Water Resources Control Board. Based in Sacramento, she handles legislation concerning water issues throughout all of California.