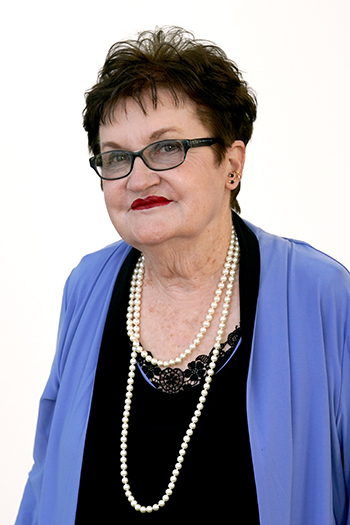 Rosemary Waters has been described as “all action, all the time.” A lively force in the Fresno community and a longtime supporter of Fresno State, she raised a family while also building a decades-long career in health care and education.

“When my husband's tour of duty was over, we returned to Fresno. With the skills and knowledge I had gained taking courses and assisting in running a quality control lab, I decided to return to Fresno State and earn a master’s degree in microbiology.”

She taught high school half time while completing her graduate course work and earned her master’s degree with distinction in 1972. She was hired by Reedley College to coordinate and teach in their Dental Assisting Program and microbiology.

“Having worked in my father’s dental office during high school and college, I was required by my parents to earn certifications in both dental assisting and dental radiography. Though at the time, I did not want to take those classes, I am sure that is why I got the job at Reedley College. Years later, I thanked my parents.” She was liaison to approximately 600 dental offices in the Central Valley, arranging students’ internships and job placement after graduation. She also did private consulting on infection control protocols for dental offices and clinics, including those in prisons. HIV was a major concern for dental professionals at the time, so she researched and developed a training manual addressing OSHA’S Blood Borne Pathogen Standard and conducted continuing education seminars for offices and large groups.

In 1994, she transferred from the Reedley College to the Biology Department at Fresno City College, where she taught microbiology and general biology courses. Since the microbiology lab manuals available at the time did not address the information and skills needed by students in a relevant way, she and two former students authored a lab manual with graphics and color photographs that did so. Several local colleges use it in their introductory microbiology course. All proceeds from the sale of the manuals are deposited in an account that provides scholarships at Fresno City College. Rosemary retired in 2009 after a 40-year teaching career and was honored with Emerita status. She recalled the trajectory of one of her most gifted students who, at age 15, began taking biology classes at Fresno City College. The young woman earned a degree at UC Berkeley, an MPH at Emory while working for the CDC, doing malaria research in South America and served for two years in Africa with the Peace Corps. She applied to universities that offered Ph.D.- M.D. degrees, and was accepted to every school where she applied. She chose Duke and recently defended her doctoral dissertation via Zoom, where she credited Rosemary Waters as her mentor. She is now completing the M.D. component of her training. “That is the biggest payback, when you see the role you played in their education and what they have gone on to do with their lives, and they thank you for encouraging them that they could do it!”

At Fresno State, Rosemary and Jerry Waters have supported renovations to the biology labs, scholarships for students with declared majors in some aspect of biology, and the Health Careers Opportunity Program (HCOP). They are members of the President’s Circle, the Bulldog Foundation and supporters of the Student Cupboard. Additionally, they have continuously supported numerous non-profit organizations in the Fresno community, including the Boys and Girls Clubs, Marjaree Mason Center, Poverello House, Holy Cross Center and Fresno Chaffee Zoo.

Asked what drives her to give back to the community, Rosemary said, “I have been given a lot in my life. At Fresno State, I had many outstanding professors and received a quality education that enabled me to pursue a meaningful career. Sponsoring classrooms at the Chaffee Zoo enables their staff to have world-class teaching spaces that are used by students from all over the Valley.” Rosemary loves to see busloads of students, especially from small Valley communities, on field trips to the zoo. ”Seeing them have the opportunity to learn first-hand about the animals, it is a privilege to play some small role in making it possible. I cannot help but be proud.”