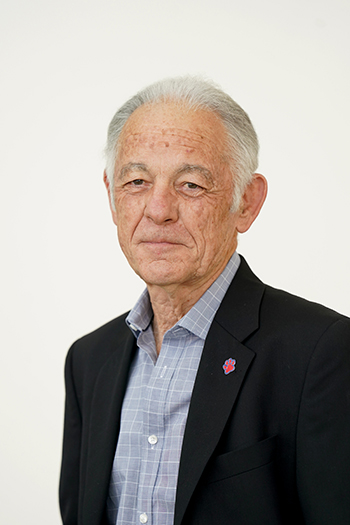 Born in Tuscany, Italy, into a family of vintners, Marcello was a youngster when his family immigrated to the United States and settled in Madera. They brought the tradition of raising grapes with them.

Marcello recollects his first memories of life here as, "Working in the vineyard, pruning, suckering, picking grapes and making wine with the family." His fondest memories are the big family dinners with parents, grandparents and his uncle. They all lived in the same small house so it was a daily occurance of homemade pasta, vegetables from the garden, small portions of meat -- usually chicken or rabbit -- fruit, cheese and always his dad's homemade bread and wine. The Sunday lunches lasted all afternoon, usually ending with accordion music, singing, and an extra glass or two of wine. "La Vita Bella" -- The beautiful life, he remembers.

His mother packed wine in his lunch all through grammar school and high school. Wine in his family and culture was considered an essential, similar to pasta, bread, meat. It was always consumed with food.

Life was a little difficult when he started school. He could not speak a word of English, and therefore did not pass his first year. As he learned the language though, his parents insisted that he speak English to his sister to make sure that she did not experience the same problem when she went to school.

When Marcello graduated from high school his father encouraged him to attend Fresno State. He had heard they had a good agriculture program there. Marcello knew “a Mr. V. Petrucci” at Fresno State who he had met when his FFA group went there for pruning and vine judging contests. So, he decided to attend the college with a major in Viticulture and Enology. He loved it! "All of a sudden I had freedom to enjoy being me,” he said. “I was not the little, backward, Italian boy that I thought I was. I am Marcello."

At Fresno State he received, "One of the best educations possible in the industry, with a strong foundation to succeed in the wine business." He states, "The freedom I had to make wine and experiment in the vineyard, I will always remember and be thankful for. I especially remember gratefully the professors taking time to explain and answer questions.

Monticelli was really impressed by Julio Gallo, the viticulturist, winemaker, engineer and businessman. His commitment to quality, "All the Best", meant exactly that, from jug wines to the premium Gallo varietals. The customer got the best value. Marcello credits Julio with teaching him leadership. He was, "tough, controlling, and determined to get his winemakers to work up to their potential and become an important part of Gallo." Mr. Gallo, according to Marcello, wanted creative people, continuous improvement and striving for excellence. Marcello's favorite quote from Julio was "In order to walk on water, you must take that first step off of the boat." Marcello remembers Julio as demanding, but also, kind, warm, gentle and caring. He went to great lengths to get the best and share it. He appreciated his team's success. His strong belief in faith, family and friends was exactly what Marcello had experienced in his own family. His rapport with Julio led to dinners at the Gallo house, Marcello's house, a few times at the Monticelli cabin, mushroom hunting and a bond that Marcello treasures to this day.

In Modesto, Montecelli made almost every wine possible -- Ripple, Boone's, Night Train, Andre, Carlo Rossi and Hearty Burgundy, to name only a few. In 1989 he was given responsibility of the Premium/Coastal wine program, including the development of the Estate and Single Vineyard wines and other coastal wines. Under Marcello's wine making direction, skill and creativity, the award-winning wines of Gallo of Sonoma, Napa, Central Coast, Washington and the Central Valley were highly acclaimed by wine experts and, most importantly, the American consumer.

Also, in this pivotal year in his career, he was honored as Outstanding Alumnus by the Fresno State Enology Society and Enology Program, an honor he truly feels humble about. "Only in America," he often says. Monticelli has had 50 years with the Gallo family. He started as an enologist, became winemaker, then director and finally vice president and winemaster for the Premium Wine Division. He had the pleasure of working closely with three generations of the family, and ended his time there with the fourth. He is thankful to Julio for encouraging his winemaking skills, and then Bob for his business skills. He thanks them for encouraging his creativity and allowing his ideas to become a reality.

Julio once told Marcello, "The most important measurement of a business is its people." Marcello agrees and remembers all the time Julio spent with him. "They call it mentoring now." He has also spent time mentoring the people he has worked with and claims that the Premium Winemaking Team is the best, with great talent, and it will continue to produce and deliver great wines.

Marcello worked very closely with Gina and Matt Gallo in Sonoma, CA. Gina is Julio's granddaughter and the V.P. of Estate Winemaking. She started working with him in the early 1990's. They have challenged everything and experimented with more things than they can even recall. Optical sorting, jet valves, pump over design, punch down design, mechanical sorting, destemmer improvement, sorting in the field, extraction techniques, UV lite, cold and hot soak, D.O.V, centrifuges, varieties and clones, and many oak experiments. That is just the tip of the iceberg. Marcello claims Gina is blessed with an unbelievable palette and has Julio's passion for every facet of the winemaking process. Her interest is infinite and has led her to make some of the best wines, California/World. Marcello says that even though he has recently retired, he sees many more wine tasting experiences with Gina in the future.

Marcello enjoys so many of the values that his family and the Gallos have instilled in him. The pleasure of family and good friends sharing amazing food, the best wines and many happy occasions. His greatest pleasure is the smile on faces and compliments he receives when people are enjoying wines that he created. He thanks his parents for the best family values and his wife Margaret for putting up with the odd hours and long harvest desertions that winemakers experience. Marcello and Margaret have three sons. Marcus is a chemical engineer and Massimo and Mario are both winemakers, as is their daughter-in-law, Anna.

"From Italian immigrant, to four amazing years at Fresno State for which I am truly grateful, to 50 years with the Gallo family, I am truly living La Vita Bella.”