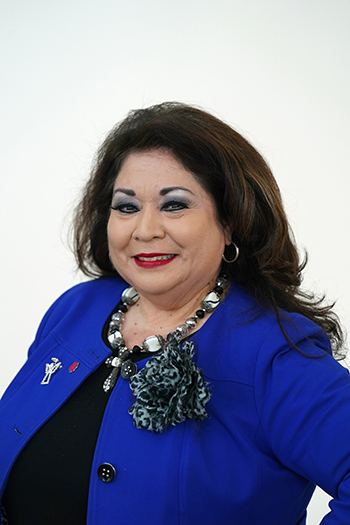 Saving the lives of thousands of children was never something Lisa Casarez-Austin planned to do.

Before Casarez-Austin founded the Angels of Grace Family Foster Agency, she was a young woman in a traditional, religious family who wanted only to become a wife and mother. But when she married and had children, her life was not the dream she thought it would be. She became a victim of domestic violence and endured numerous trips to  the hospital.

During one of her hospital visits, a nurse took the time to talk to Casarez-Austin. “She said I was beautiful and had worth and that this wasn’t something that should be happening to me,” Casarez-Austin remembers. The conversation was enough to make her seek help at the Marjaree Mason Center in Fresno, where she saw a TV commercial for classes at Fresno City College.

“I found out that day that I was pregnant with my third child, and I had a 2-year-old and a 4-year-old. I knew I didn’t want to go back [to my husband] and I made the phone call [to enroll at Fresno City College], thinking I was going to become a dental hygienist.”

At Fresno City College, Casarez-Austin became a vocal advocate for women affected by domestic violence. Later, with the encouragement of her counselors, she transferred to Fresno State to get a degree in social work.

Casarez-Austin became an at-large senator in Associated Students, Inc. (ASI) and led the movement to create a daycare center in the library to support student-mothers. After continuous encouragement from professors, Casarez-Austin decided to continue her education, pursuing a master’s degree in Social Work.

“It wasn’t ever my intent to get my master’s,” Casarez-Austin said. “I never saw myself as someone who would be able to receive a degree at that level. It wasn’t until other people saw it in me … I thought, ‘If you think I can do it, let me try to do it.’ And it’s really a shared gift, because now I can give that to the children that I rescue.”

Casarez-Austin became a MUSE Scholar and McNair Scholar, and graduated with her master’s degree in 2000. She then founded Angels of Grace Family Foster Agency,  a therapeutic agency, with social workers who work alongside Child Protective Services 24/7 to help children out of abuse and neglect. In addition to offering a safe space, the agency is equipped to offer clothing, shoes, car seats, diapers, formula and other basic needs.

Through Angels of Grace, Casarez-Austin has helped approximately one thousand children, treating each one with the same kind of love she gives to her own children. “I tell them, ‘You can do this … You’re a princess. You’re a king. You’re special.’ And they start to see themselves that way. They come back [to visit me] and they’re doing great things in their lives.”

In addition to her work with Angels of Grace, Casarez-Austin has remained active in the Fresno community, specifically at Fresno State. She’s given informational talks to student-athletes about domestic violence and has supported the Student Cupboard since it first opened in 2014.

In recent years, Casarez-Austin has received a number of accolades for her work. In 2010, she was named Business Woman of the Year by the Central California Hispanic Chamber of Commerce, and was also honored as the Girl Scouts Inspirational Woman of the Year. She was selected for  a Local Hero Award from Valley Public Television and Union Bank of California, and received the Hispanic Heritage Leadership Award from Assemblywoman Sarah Reyes. In 2013, the Fresno Women’s Chamber of Commerce named Casarez-Austin Mother of the Year.

Angels of Grace has also been recognized, both locally and nationally. In 2019, the agency was recognized by the California Association of Nonprofits as the 8th Senate District Nonprofit of the Year. In 2020, Angels of Grace received the Angels in Adoption Award in Washington, D.C.

Throughout her journey, Casarez-Austin has remained thankful to everyone who has helped her touch the lives of children through Angels of Grace, including families, staff and community members who donate clothing, diapers and other items. “That’s the beautiful part. You share your heart and people come alongside you and make it happen. It’s not just a one-woman show; it’s a community show.”