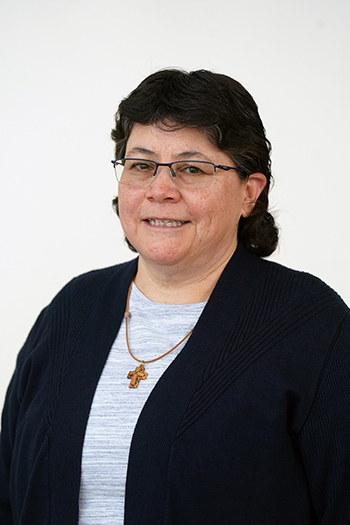 Before she went on to work for NASA and The Boeing Company, Juanita Leal spent her childhood watching airplanes fly overhead, dreaming one day she would be a pilot or an astronaut.

“I have had a passion for space since I was 4, along with a desire to be a pilot, so it’s been a dream come true to be able to work on space shuttles, to work on the International Space Station components,” Leal says. “I always watch [the space station] fly by and think, ‘I worked on that and it’s still up there, providing benefits and more science.’” Leal was born in west Texas to a farmworker family. They moved to California’s Central Valley when she was just over a year old. She grew up in Del Rey and Sanger and later attended Fresno State, where she was originally a computer science major.

“I wasn’t doing so well,” she says. “Then, the Fresno State Math, Engineering, Science Achievement Program (also known as MESA) called and asked if I had ever considered engineering. After a long conversation, I decided engineering was a better path.”

Through the MESA Program, Leal got a cooperative education job, which allowed her to split her time — going to school for one semester out of the year and spending the other semester working for NASA. “My very first semester as an engineering student was actually my very first semester in my professional career. I worked on all kinds of cool stuff at NASA - Edwards Air Force Base. I worked on fighter airplanes as well as experimental airplanes. I also had the opportunity to see multiple space shuttle landings. I don’t know what could’ve been more motivating.” After a few years, Leal transferred to the Johnson Space Center in Houston, where she worked on an optical communications program that flew on Space Shuttle Mission STS-43. She hadn’t had an optical communications class yet, so she had to teach herself on the job. She then filled in the gaps in her knowledge when she returned to Fresno State. Leal earned her Bachelors of Science degree in Electrical Engineering in 1990. She returned to Edwards Air Force Base, where she worked for the Department of the Air Force as a Flight Test Engineer on F-15 and F-16 fighter airplanes. She also earned her master’s degree in Electrical Engineering in 1995.

Leal joined Boeing as a test and evaluation engineer on the Space Shuttle Program in 1997. She was inducted into Boeing’s Technical Fellowship Program in 2019. This program is a highly selective technical leadership career path that includes approximately 2.4% percent of Boeing’s technical workforce (females in the program are approximately 0.2% of Boeing’s technical workforce; Hispanics (both male and female) comprise less than 0.1% of Boeing’s technical workforce). This program represents some of the best engineering and scientific minds at Boeing and in the industry. Leal has been with Boeing for nearly 24 years and is a recognized expert in integration test and evaluation in lab, ground, field, flight and space environments. She has had an impact across Boeing’s Defense Systems, Commercial Airplanes and Test and Evaluation Divisions.

When asked if she has faced any obstacles throughout her career, Leal says, “Many … it doesn’t seem right to choose a particular one, but one obstacle I have encountered multiple times is being underestimated.” Leal says she never let any obstacles come between herself and her career goals; she draws on the perseverance she learned from her parents. “When I was one-and-a-half, I got a bacterial infection. The doctors had dire predictions. [My parents] would not take that for an answer. They were faithful and never gave up. That taught me to never give up.” Leal is passionate about giving back to her local community as well as internationally. She feels that the foundation of her volunteer work is her first language, Spanish, and her strong Catholic faith. She has traveled to Honduras on a church mission trip to assist at orphanages founded by non-government organization, Sociedad Amigos de Los Niños. She also has served as a Spanish translator on two mission trips to Honduras with See The Lord, a non-profit organization based in the Bay Area that provides free eye exams and custom eyeglasses to the underserved.

Locally, Leal has stayed connected to her roots in Sanger. She has been a guest speaker throughout Sanger Unified School District and has coached the Sanger High School robotics team. Her pride and joy is the annual scholarship she founded at Sanger High School to assist students from farmworker families. She created the scholarship as a lasting legacy to the values her parents, Zeferino and Juanita Leal, taught her. Since 2008, she has awarded nearly $20,000 and meets each scholarship recipient for one-on-one mentoring and coaching.

Leal also mentors all levels of Boeing employees, recently joining a Women of Color cohort to help bring more diversity to the Technical Fellowship Program. She also has coached Fresno State students, helping them build their resumes to assist them in breaking into the aerospace industry.

“My mentoring philosophy is to be a positive force to help others grow to reach their potential. The mentoring I do, with the scholarship students, students from Fresno State, within Boeing -- it’s all to help people reach their full potential.”