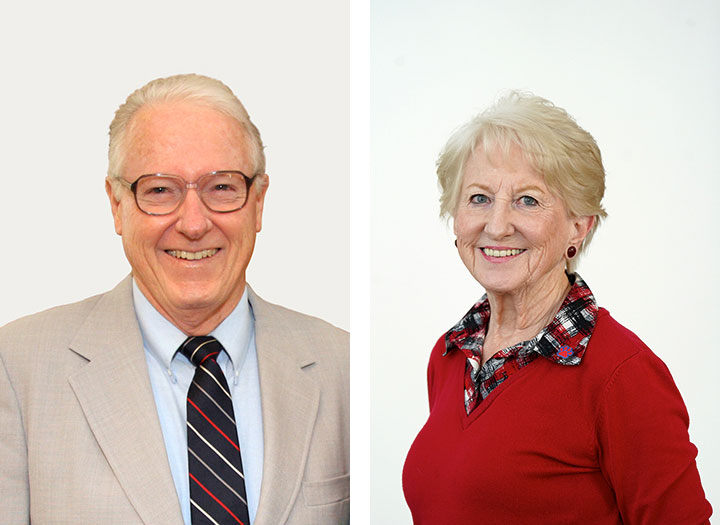 After graduating from college in Northern Ireland, Liz Shields moved from home to Botswana, where she met John Shields, a volunteer in the Peace Corps and her future husband.

Liz and John taught at the same high school in Botswana, surrounded by the wildlife of southern Africa. “You could drive along the roads and see giraffes and ostriches, not all of the time, but frequently,” Liz Shields said. The couple got engaged after nine months and were married in 1969 in Turkey, where they had continued working as volunteers. A wedding in Ireland was not possible because “The Troubles” had erupted in Northern Island, with violence between Catholics and Protestants, Liz said.

In order to avoid any problems, since John was raised Catholic and Liz’s family was Protestant, Liz’s mother wrote to tell her not to return to Northern Ireland to get married. However, just before her wedding date, Liz received a small package from her mother: a wedding dress.

Unlike Liz, John spent much of his childhood and teen years traveling with his family, and attended schools in Germany and Japan. He developed a strong love for travel, which he later shared with Liz. As newlyweds, the couple traveled through Asia and Europe for another five months, visiting Greece, Iran, Afghanistan, Pakistan, India, Sri Lanka, Nepal, Russia, Scandinavia and Ireland, where John met Liz’s parents. The couple then moved to the U.S., John’s home country. They settled in Michigan and enrolled in graduate programs at Michigan State University. Liz studied soil science and then finance, while John studied agricultural economics. They later moved to Fresno, and it has been their home for over 40 years.

“Fresno is home for us,” Liz said. “We really like the community spirit in Fresno. And coming from a farm I enjoy living in one of the most productive agricultural regions in the world.” Both Liz and John became professors at Fresno State. Liz taught in the Craig School of Business for 30 years. John taught in the Jordan College of Agricultural Sciences and Technology for 31 years. “It's very gratifying because you see how [the students] move into the world and how they become successful; you hear from them and see them on the news. We like to follow our students as much as we can.”

Throughout their tenure at Fresno State, Liz and John continued working internationally — in Botswana and at the Agricultural Academy and Yerevan State University in Armenia. John also spent three years working with the Board of International Food and Agricultural Development in Washington, D.C. And Liz received a grant from the National Endowment for Financial Education to develop a series of classes in personal finance for people in drug rehabilitation.

Liz and John were long-time donors and volunteers for numerous programs at Fresno State, and in 2016 established their own scholarship program for students wanting to study abroad. The Shields Family Study Abroad Grant funds between four and eight full awards each year for students who would otherwise be unable to study in a foreign country.

“It gives students a greater perspective of the world. When they hear news from that part of the world they’ve been in, they can put it in context. It also, perhaps, stirs up their love for travel, so that they will continue to do this for many years afterward. And when they return they appreciate their own surroundings better, looking at them with fresh eyes,” Liz said.

John passed away in 2018, after a short battle with cancer. Liz has continued the work she and John dedicated their lives to in the community and with students, securing an endowment for their scholarship and holding a leadership position with the League of Women Voters of Fresno. She still visits the University and takes long walks around campus, but plans to move to New Mexico to be closer to her daughter, son-in-law and her four grandchildren. In reflecting on her life and journey with John, all of the unexpected but beloved twists and turns, Liz said their lives exemplify the famous quote, “Not all those who wander are lost.”

“I wouldn’t advise everybody to lose focus on what they want to do, but being able to be immersed in different disciplines and cultures really broadens your mind.”