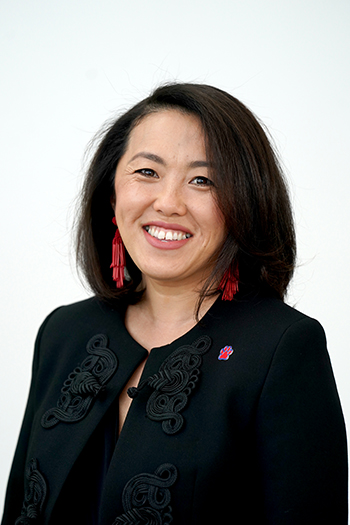 Yang-Johnson, the eighth of 13 children, is the daughter of refugees. “They were displaced from their home and then came to the U.S. We grew up in public housing in San Diego. My dad discovered he had relatives who were here in Fresno, working in the fields. There were a lot of Hmong refugees who settled here in the Central Valley, so my father moved us up here when I was very young.”

School was tough for Yang-Johnson early on. She recalls taking English language learner classes, trying to advocate for herself in the conversations she translated between her parents and teachers, and trying to read books she didn’t fully understand. “I really wanted to learn. It was a passion of mine -- to constantly learn; it still is. It wasn’t easy at all but I thought, ‘Eventually I will learn how to read this, so I’m just going to sit here and try to get through this book.’”

Yang-Johnson’s natural ambition to learn coupled with her parents’ emphasis on the importance of education eventually led her to Fresno State, where she majored in women’s studies. Yang-Johnson credits her Fresno State professors with helping her to think critically, explore her interests and find her voice. But Yang-Johnson had to leave school before she could graduate.

“I was struggling. I was working three jobs. I didn’t live at home. I couldn’t make rent. I didn’t have a car. I felt like I just didn’t know how to make it work. My grades weren’t doing well, and I needed to take a break and figure out how to actually survive.”

Before she left, Yang-Johnson made a promise to one of her professors, Dr. Jan Slaughter, that she would return. Dr. Slaughter reached out to Yang-Johnson every couple of months over the years she was away. “It reminded me that someone else cared about me and my well-being and encouraged me to strive to go back to campus. She held me accountable. When I say Fresno State saved my life, I really mean it. I don’t know that I would be where I am right now if I didn’t have professors who encouraged me to come back to school ... to say ‘That’s not it for you.’”

Yang-Johnson completed her degree in 2009, becoming the first woman in her family to graduate from college.

Yang-Johnson then started working as a program officer for Central Valley Community Foundation, where she focused on empowering underserved communities and strengthening the capacity of nonprofits. The work merged a number of her passions and she was able to put into practice what she’d learned about philanthropy. She also got to utilize what she learned about economic and community development while she worked in India with activist Vandana Shiva during her last year at Fresno State.

From there, Yang-Johnson became vice president and community relations senior consultant for Wells Fargo. In this role, she is charged with implementing Wells Fargo’s community and economic development programs. She manages the bank’s regional philanthropy and maintains the company’s social impact and sustainability initiatives that support underserved populations. In addition to her work with Wells Fargo, Yang-Johnson stays connected to the community through a number of organizations. She has served on the board of the Women’s Foundation of California, Access Plus Capital, Central California Asian Pacific Women and the statewide steering committee for Smart Growth California. She currently serves on the board of the James B. McClatchy Foundation, REinvent Stockton Foundation and The California Wellness Foundation’s board of directors, where she championed two of the largest gifts ever given to Fresno State’s Women’s Studies program.

For her work, Yang-Johnson has been named a Bankers Without Borders Global Fellow and a 2014 Funders Network PLACES Fellow. She has also received a number of awards and recognitions, including the Women Leading the Way Award from the City of Fresno and the Margaret Ashida Leadership Award from Leadership Education for Asian Pacifics.

Recently, Yang-Johnson’s contributions to the community have become even more personal. In 2018, she founded the Mala Scholarship with Central California Asian Pacific Women (CCAPW) to support first-generation Asian Pacific Islander students as they pursue higher education. “Every time someone gave me money to help with my books or I got a small scholarship, I thought this person believed in me enough to invest in me and it carried me through. So when I started the Mala Scholarship, I wanted to work with CCAPW to invest in first-generation students and say, ‘I believe in you. I’m with you on this journey.’”

“Mala is a string of prayer beads, and I want to believe that every scholarship we give through the Mala Scholarship is a prayer and a wish and hope that these first-generation students are on the right journey, the right path in their life.”