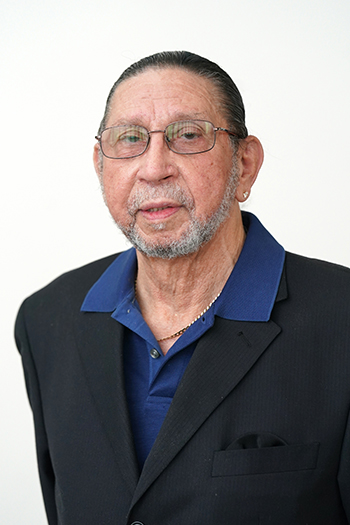 The sixth of ten children, Frank Johnson, Sr. was born near Hope, Arkansas in 1939. Very early in his life, Johnson learned to value education. In 1943, his parents, Irene and Odell Johnson, Sr., moved the family to Imperial, California, to escape racism and to seek better schools, colleges and jobs for their children. Five years later the Johnson family settled in Fresno, when his oldest brother Roland accepted a scholarship to play football for Fresno State College.

Johnson graduated from Fresno State in 1963 with a B.A. degree in education and holds several credentials in the field of education and counseling. After graduation he began a 16- year-career with the West Fresno School District and his roles included teacher, counselor, principal and most notably, the first African American superintendent in the Central Valley. In 1977, Johnson was honored as the “California School District Superintendent of the Year” by the members of the California Black School Board Association. The award honored his innovative changes in the West Fresno School District, including smaller classes, increased teachers’ pay and major renovations and repairs to buildings on campus. Additionally he was credited for improving the curriculum that resulted in increases in the students' California Achievement test scores.

Between 1969 and 1982 Johnson served as publisher and editor of the Grapevine Magazine, which he founded with his two brothers and three friends. The popular magazine highlighted positive news featuring African Americans who lived in Central California.

“Back then, we had Dr. Martin Luther King marching and Malcolm X and quite a few Black leaders all over the country. It was positive what they were doing and we wanted to bring that spirit here locally and showcase the Black community,” Johnson said.

In time, the magazine expanded its news coverage and became popular throughout California, later operating out of offices in Fresno and Los Angeles. It was acclaimed by historically black colleges and universities, including Morehouse College and Howard University. The Grapevine founders and staff received numerous awards from various organizations for their excellence in journalism.

More recently, The Grapevine Magazine received a new wave of attention. The Henry Madden Library hosted a special exhibit in February 2020 to celebrate Johnson’s historical work with the magazine. This was the first-ever exhibit to showcase African American media specifically from the Central Valley. Following the exhibit, Johnson donated a complete collection of The Grapevine to the Henry Madden Library Special Collections Research Center.

In 1984, Johnson wrote and published Who’s Who of Black Millionaires, which became a national bestseller. The book can be found in schools, colleges and libraries throughout the United States, including a preserved copy in the United States Library of Congress in Washington, D.C.

Johnson left education in the 1990s to serve as the executive director of the nonprofit organization, Neighborhood Opportunities for Affordable Housing, Inc.(NOAH), which he also helped to found. During his tenure at NOAH, Johnson constructed, rehabilitated, and sold over 125 homes to families through Fresno for the city’s First Time Homebuyers program.

“I knew the power of owning a home and I wanted to help as many people as possible to live that dream...owning their own home,” he said.

Johnson served on numerous boards and committees, including the City of Fresno Civil Service Board and was a member of the Fresno City and County Fair Housing Board. He was baptized in the AME Church in Fresno and a member of the grad chapter of Phi Beta Sigma Fraternity.

Johnson has received a number of certificates or recognition from the Fresno City Council, the State of California Senate and Assembly and a Certificate of Special Congressional Recognition. In 2015, the African American Historical and Cultural Museum of the San Joaquin Valley formally inducted Johnson as an outstanding community leader and trailblazer.

When thinking about what inspired his work, Johnson said, “I tried to be a role model for others, especially my students. I wanted to show them that they could accomplish great things.” For the past 55 years, the Johnson family has given out 10,000 Christmas candy and fruit bags to needy families and friends throughout Fresno.

Johnson and his wife Betty have been married for 60 years. Their two sons, Troy and Frank Jr., two daughters-in-laws, Angela and Adriane, and their grandchildren have earned a total of eleven college degrees --eight bachelor degrees, two master’s degrees and one associate’s degree. Johnson’s grandchildren, Devin, Taylor and Brandon are currently enrolled in college.