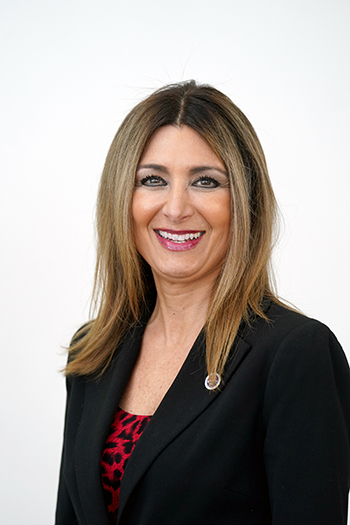 “What inspires me is that we are making a difference in the lives of our students now and for generations to come,” says Deborah Adishian-Astone, the vice president for administration and chief financial officer at Fresno State.

Growing up, Adishian-Astone’s family always emphasized the importance of education. She decided she wanted to get her degree from Fresno State after graduating from Fresno High School in 1983. “I knew I wanted to major in business and I knew Fresno State’s business school had a very good reputation. I didn’t apply to any other university. I only applied to Fresno State and I remember saying ‘I hope I get admitted as that’s where I’m going.’”

Adishian-Astone quickly became involved on campus and in the community during her freshman year. She was a member of the University Student Union Board and joined Delta Gamma sorority with a number of her close friends from St. Paul Armenian Apostolic Church. She was president of the sorority in her senior year.

Adishian-Astone started working as a student assistant in Facilities Planning when she was a freshman. She didn’t know it at the time, but that exposure would serve as a huge stepping stone for her long-standing career at Fresno State.

After graduating with her B.S. in Business Administration in 1988, Adishian-Astone applied for a full-time job as an assistant facilities planner at Fresno State. She worked her way up in the department to interim director of facilities and then was appointed in 1996 to serve as the project coordinator for the Save Mart Center.

In 1989, after marrying her husband Mark, who she met at Fresno State, Adishian-Astone went back to school for her master’s degree in Business Administration. It was a busy time -- working, attending class and raising their oldest son, Andrew, who was born in 1992. She graduated with her MBA in 1994. As she continued to grow in her career, she also grew her family, welcoming second son, Matthew, just days before attending the groundbreaking ceremony for the Save Mart Center in May 2001.

Adishian-Astone was named the associate vice president for Auxiliary Operations/executive director of Auxiliary Services in 2001. In this role, she oversaw all Auxiliary operations, including the Kennel Bookstore, Fresno State Student Housing, University Dining Services and the Save Mart Center. She also served as executive director for both the Fresno State Foundation and Agricultural Foundation. In addition, she oversaw the construction of the Student Recreation Center and Campus Pointe — the largest mixed-use, public-private partnership in the CSU system and an inspiration for schools in California and across the nation to engage with students and the public.

Adishian-Astone says her biggest inspiration has always been to serve and support the students at Fresno State. “Our students deserve to have access to state-of-the-art facilities. I have always strived to look to the future ... what we can do better, what we can do differently. I have had the honor of working collaboratively with great colleagues who have the same passion and dedication. Together, we have been able to help transform the landscape of our campus.”

In 2015, former president Joseph Castro approached Adishian-Astone to serve as the interim vice president for Administration and chief financial officer. In time, she was named the permanent VP/CFO. In this role, she oversees human resources/payroll, facilities management, environmental health and safety, public safety, parking and transportation, auxiliary services, and is chair of the Athletic Corporation Board and the Association Board. She continues to serve as the executive director for the Fresno State Foundation Board and the Agricultural Foundation Board.

One of the more personal and meaningful projects she was honored to be involved with was construction of the Armenian Genocide Monument. That held a special significance to Adishian-Astone, whose maternal grandfather came to America during the genocide. “I remember hearing his horrific stories and the perils he and his family endured to have their freedom, but it also taught us about perseverance and hope for a better life,” she says. “Being able to be part of making that monument a reality for our Armenian community meant so much.” Adishian-Astone remains a very active member in the community, serving on the President’s Armenian Leadership Council at Fresno State, as a member of the Fresno chapter of Delta Gamma Alumnae, a Lifetime member of the Fresno State Alumni Association and supporter of the Bulldog Foundation, the Armenian Studies Program, the Craig School of Business and the Student Cupboard. When asked what’s compelled her to stay in Fresno and continue to give back, Adishian-Astone says, “This has always been home for me and I have always felt that I could continue to help make a difference, even all these years later. I am just as inspired, energetic, engaged and excited about serving at Fresno State as I was when I started 38 years ago. The future is bright for Fresno State and I am honored to have played a small part.”