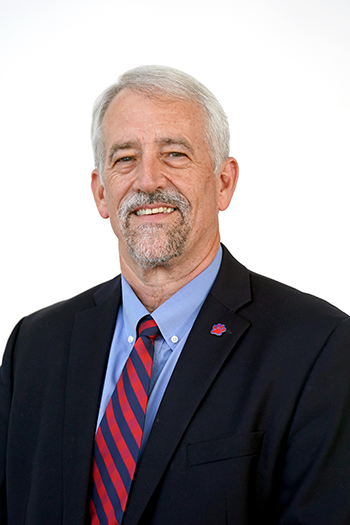 Andy Souza describes himself as a “rain man” when it comes to numbers, saying there was a time when he could solve certain math problems faster than a calculator. It was this natural affinity for numbers that opened doors for Souza, but what sets him apart and led to the success that characterizes his career is his belief that “there’s a story behind the numbers.”

Originally from Salinas, Souza was the first in his family to go to college. He arrived at Fresno State planning to play football and study math. “I always knew I was going to go to college,” Souza said. “But I had no idea what that meant.” Souza’s freshman year was rocky — he had to give up his dream of playing football because of an injury and ended up on academic probation — but he was able to get back on track academically and even met his wife, Marcia.

Souza graduated in 1981 and began working as an accountant. After four years and a lot of work-related travel, the job no longer felt like a good fit for his family — he and Marcia had a young child and were expecting another. He left the firm and began a 25-year journey working in city management. He served as the Controller as well as Assistant City Manager for the City of Fresno, a member of the Kingsburg Planning Commission and City Council, and as the Fresno City Manager. In his role as City Manager, Souza oversaw approximately 4,000 employees and a wide range of departments, including fire and police, parks, water treatment, the airport and the Convention Center.

Then in 2010, Souza left city management and became CEO and President of the Central California Food Bank (CCFB).


“When I was at City Hall, hunger was an issue that was hidden in plain sight. It was there and I just never saw it,” Souza says. “Once I got [to the Food Bank], I realized I’ve been in high level positions without an awareness and sensitivity to what was happening with so many people in our community. That was really eye-opening and quite humbling, but also quite challenging.”

Souza’s successes at CCFB are unparalleled. In his 10 years with CCFB, they were able to more than double food distribution, from 20 million pounds annually to 42 million pounds. With Souza’s leadership, CCFB grew their services to meet the needs of families, including mobile pantries, neighborhood markets and a nutrition on wheels program where, using a custom food truck, recipes and teaching demonstrations are provided to teach people how to prepare healthy food.

Souza also partnered CCFB with local agencies and leaders to meet unmet needs of people in the Valley. CCFB has worked with local farmers and suppliers to increase the amount of fresh produce distributed, and also assists ten local schools with the BackPack Program, which provides students with a backpack of enough healthy food to sustain their families for the weekend. In 2019, CCFB partnered with State Senator Melissa Hurtado to launch the Hurtado Holiday Baby Formula and Infant Nutrition Drive.

Additionally, Souza has overseen the growth of CCFB’s facilities, including the purchase of a new base of operation, which tripled CCFB’s storage and operating space, and the recent donation of a packing line from the Ricchiuti family.

A major highlight of Souza’s tenure with CCFB is the partnership forged with Fresno State’s Student Cupboard when it opened in 2014. CCFB currently provides about 70 percent of the food distributed at the Student Cupboard and helps supply diapers to almost 400 students per month.

“[Former Fresno State First Lady Mary Castro] said to me, ‘So many of the first-generation students we have now are the hero in their family. They go to college and they can’t reach back; they can’t ask for help because they’re the ones that made it….and without the pantry, we lose them. It’s not just that they’re not going to get the education but layer that with the sense of failure. The sense that now they’ve let their family down and their community down.’”

That was so powerful and profound, and a reminder that these can’t just be faceless, nameless numbers … The lack of access to food should not keep anybody from that education that can transform their lives, their kids’ lives; it can change, generationally, the trajectory of a family.

Souza was also a leader in the fight against hunger at the national and state level. He served on Feeding America’s National Policy Committee for eight years, and served as the chairman of the committee for four years. He also served on Feeding America’s National Advisory Committee. At the state level, he served on the Board of Directors of the California Association of Food Banks, including a term as board chairman. His leadership at these levels was honored in 2017 when he was awarded Feeding America’s Dick Goebel Award, which recognizes outstanding public service and commitment to ending hunger nationwide, as well as within the local community.

In addition to his professional work, Souza serves on the Fresno State Alumni Association’s Board of Directors and is a supporter of the Division of Student Affairs and Enrollment Management’s Renaissance Scholars.

In 2020, Souza left CCFB to become Chief Administrative Officer with Immanuel Schools, private Christian schools in Reedley, where he and his family have a history and connection to the community. Souza was excited to have the opportunity to invest in over 700 students’ lives, including his own grandchildren. “My life is about family and faith, and I realized this was an opportunity for that to really come together.”

Souza was part of the effort to safely bring Immanuel Schools’ students back to campus. “We’ve had a unique year,” Souza says. “We’ve been able to stay open, following guidelines, and so we’ve got kids on campus. That’s been exciting to be a part of. I never thought I’d have the chance to be on campus with my grandkids!”