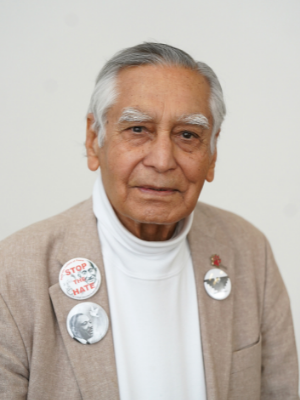 Before settling in Fresno, Dr. Sudarshan Kapoor grew up in Panjab, India, where he was inspired by his grandparents, teachers and Mahatma Gandhi. Kapoor recalls, “I participated in several demonstrations, marches, and picket lines [as a college student]. That laid the foundation of activism in my life.”

“[Gandhi] was a major influence in my life when I was growing up in India, and particularly after his assassination…that he became the victim of violence, that he was preaching nonviolence…that hit me very hard and affected me very much; and his teachings have always been a part of my life.”

Kapoor graduated from Panjab University in 1955, and went on to earn a master’s degree in social work from Delhi University in 1957. After graduating, he worked as a chief organizer for the Gandhi Memorial National Trust, an organization dedicated to the development and social transformation through Gandhian social work, also known as 18-point Gandhian Constructive Program. He also participated in the Sarvodaya Movement under the leadership of Gandhi’s close associate, Vinoba Bhave.

Kapoor left India in 1962 to study at The International Institute for Social Studies (1962-63) in Hague, Holland where he received his training and diploma in social policy and planning. After completing his studies in Hague, and inspired to learn more about social work in America, Kapoor came to Florida State University in 1963 for his graduate education. “This is where I received my M.S.W and Ph.D. in education, and where I also met Veena, my wife for the last 57 years,” Kapoor said.

After completing their degrees in Florida, Kapoor and his wife moved to Toronto, where Kapoor taught and worked as a researcher at the Ontario Institute for Studies in Education.

When asked how he made the leap from Toronto to Fresno, Kapoor laughs and says, “[It] is quite a story.”

“The winters in Toronto were very severe, so I was looking for some kind of change. There was a new graduate program in social work at Fresno State. I had professors who were my teachers at Florida State, they knew me as a student, and my doctoral work, and they were very impressed. They asked me to come [with them to Fresno], and I accepted the invitation. I came for an interview.”

“And you know what happened after the interview? They [said], ‘you’re going to start teaching here.’ I’m asked to teach classes within a week. I didn’t have time to go back to Toronto.”

Kapoor has been a professor at Fresno State since 1967, making 2022 his 55th year with the University. He has taught social work, community development, and was the founder and inaugural director of Fresno State’s Peace and Conflict Studies Program.

Kapoor introduced his students to the philosophies of Gandhi, Martin Luther King Jr. and César Chávez. Chávez even held a seminar for Kapoor’s students, where they discussed nonviolence. “The students came back to Fresno State and decided they wanted to do something.”

Jame Zerl, a student in the Art Department, invited Kapoor to see a bust he was creating of Gandhi and asked if they could create something similar and permanent on campus. With Kapoor’s guidance, the students received a grant and found artists to build a statue. Later, students would also advocate for and manage the construction of statues depicting Martin Luther King Jr., César Chávez and Jane Addams, creating what is now known as Fresno State’s Peace Garden.

“We need to provide more opportunities to [young people],” Kapoor said, “so that they are not only speaking but they are listened to, their voices need to be heard…and we need to encourage [their dreams]. I tell all my young people, ‘Have a big dream. The size of your dream should be so big that you could grow into it.’”

In addition to teaching, Kapoor has served on Fresno’s Human Relations Commission, and was a founding member of the Fresno Center for Nonviolence. Kapoor has also served on the Dr. Martin Luther King Jr. Unity Committee since it was founded in 1984, where he has led an annual march from Fresno City Hall to the Fresno Memorial Auditorium. This event attracts thousands of participants and has hosted numerous dignitaries each year.

Kapoor has received several awards for his work, including: the Spirit of Abraham Award from the Islamic Cultural Center of Fresno, the Lifetime Achievement Award from the Consortium on Peace Research and Education, and the Humanitarian Award from Soka Gakkai International-USA. In 1997, he was named one of the most influential people in the Valley by The Fresno Bee. Kapoor was also one of four people recognized in 2018 by the Fresno County Office of Education for a lifetime of educational contributions.

“I feel very good that I could be instrumental in having these kinds of things on campus, because there’s a kind of legacy I want to leave behind for the future generations of students. …Each year we celebrate the birthdays of all these leaders [in the Peace Garden] and that brings more positive energy on campus. Our goal is to create more positive energy and celebrate the life and legacy of these leaders and also celebrate the diversity that we have in our culture, in our community.”

“These are the things that have inspired me, given me energy, and I will keep going until my last breath in life. I will continue serving the University and my students.”