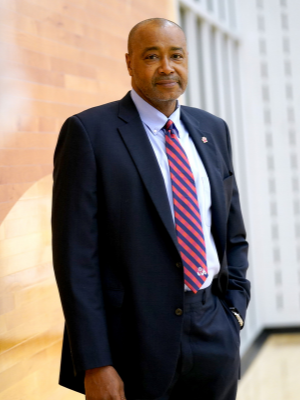 Rod Higgins’ life as an athlete is defined by his strength, perseverance and determination to continuously improve. His story begins in Illinois, where he, as a child, looked up to NBA superstar Oscar Robertson and decided that he, too, wanted to spend his life playing basketball. “I wanted to do the things that I saw him do…that was the muse for me,” Higgins said. “I was playing organized ball for the first time in seventh grade. I started out as a point guard. I was relatively small as a player.” At 5-foot-9 as a high school freshman, Higgins began most games on the bench, but that all changed the following year.

After a growth spurt, Higgins grew over 6 feet tall and was able to do things he couldn’t before, like dunk a ball. He started every game during his sophomore season and again his junior year. With more game time and a solid skillset, Higgins was gaining the attention of college coaches, including Fresno State assistant coach Jim Thrash.

Higgins and two of his teammates were invited to visit Fresno State in spring 1978. Higgins was met with sunshine and weather different from what he’d experienced his entire life in the Chicago area. He enjoyed it and got excited about the idea of attending Fresno State. Then Thrash and Fresno State head coach Boyd Grant asked Higgins and his teammates to play a pickup game with a few of the players on the Fresno State team.

“All I can remember is how strong they were, [and thinking] ‘woah, this is going to be kind of tough.’”

In his first few months at Fresno State, Higgins had to find his footing as a student-athlete, often relying on his more experienced teammates for guidance. Higgins stayed on the bench for the beginning of the season, but after a few months he became a starter. Even with that achievement, Higgins was still looking to improve — the team would often run miles down Barstow Avenue and, on weekends, Higgins would return to the trail on his own. “I would run that same thing to figure out how I [could] get better at doing it.”

“When you get in a competitive situation — we’ve all been there — you’ve got to figure out what do I need to do, what does the person in the mirror need to do to hold his or her own, so that’s what I tried to do.”

As Higgins improved, the team also saw success, making it to two conference championships, two NCAA tournaments and ranking in the top 10 in 1982, Higgins’ senior year. Higgins was named all-conference twice and earned an honorable mention All-America honor from the Associated Press and The Sporting News.

In 1982 Higgins was chosen in the second round of the NBA Draft by the Chicago Bulls. Then, in his second year as a professional athlete, Higgins faced a major injury.

“I took a fall and then one of my teammates fell on me as I was face-down on the floor, so his body hit the back of my neck. I went into seizures. My mom wanted me to retire. I’m 24 years old, basketball is what I’ve been doing for a while and I’m pretty good at it. Why would I want to retire? …I was just really fortunate to be alive at that point.”

While in the NBA, Higgins talked with two of his teammates from Fresno State, Tyrone Bradley and Bobby Anderson, about starting a basketball camp for kids in Fresno. Higgins, Bradley and Anderson asked Higgins’ new friend and teammate, rising star Michael Jordan, to be a part of the camp and he enthusiastically agreed. The youth basketball camp ran for almost 15 years.

After being traded by the Bulls, a stint in the CBA and a string of short contracts with various teams, Higgins found a new home with the Golden State Warriors in 1986. Higgins appeared in 33 playoff games. He still ranks among the Warriors all-time leaders in free throw percentage, as well as among the Golden State franchise playoff leaders in shooting, free throws, blocked shots and steals.

Higgins was inducted into the Fresno County Athletic Hall of Fame in 1995, after his final season in the NBA.

Higgins is currently vice president of basketball operations for the Atlanta Hawks. This is his 20th year as an NBA executive, having previously worked with the Wizards, Warriors and Hornets. His love for the game is shared with his two sons, Rick and Cory, an assistant coach with Orlando Magic and a professional player in the European league, respectively.