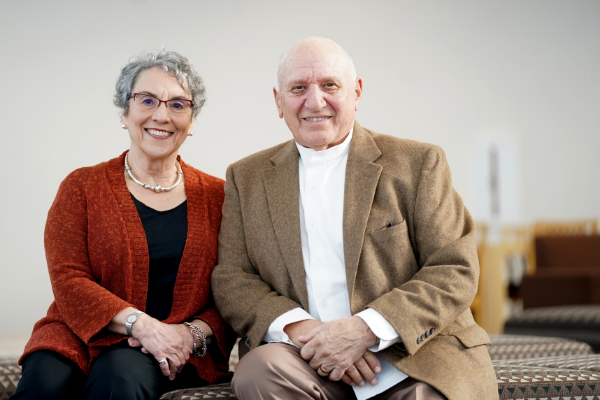 Jacqueline said, “We all became really good friends…We would go out for pizza together, go to Yosemite and go hiking together. And when Ray started to let me know he was interested in me I thought, ‘no, we’re friends.’ But then it just evolved.”

Raymond was studying philosophy and Jacqueline studied art. Jacqueline said, “I think, because I was so innocent and naïve, college was a little much for me, so I decided to take a break.” After Raymond earned his bachelor’s degree in 1967, the couple married in 1970 and moved to San Francisco, where Raymond earned a degree in dentistry from the University of the Pacific.

They later moved back to Fresno and Jacqueline re-enrolled at Fresno State, studying with Joyce Aiken, a leader in the feminist art movement. “I loved it and it was very eye opening. And from that class, we opened Gallery 25 in Fresno, which might be the longest running feminist art gallery that opened during those years; and for a long time it was all women-run.”

“Art really tells the world and history who we are at the time and place that we’re here. And artists work outside the box, so it keeps us from being all black and white. It shows that there are other ways of doing things, more creative ways of doing things. And I think it really drives our culture.”

While Jacqueline became increasingly involved in the arts community, she also opened her own business in Fig Garden Village, a specialty stationary store called Not Just Paper. She ran the business from 1979 to 1992, and was twice named one of Fresno’s Top Ten Professional Women, in 1986 and 1990.

At the same time, Raymond had started his own dental practice. He said, “I graduated from dental school and after two years of full-time practice, I started getting involved in teaching dentistry. And after a number of years part-time teaching, I commuted to San Francisco two days a week to teach while I was practicing.”

When they returned to Fresno in 1999, the Doumanians knew they wanted to give back to Fresno State students and the community. They were instrumental in the formation of the Arts and Humanities Dean’s Council Fund — which annually sponsors a student scholarship and provides funds for students and faculty within the college that are not provided by the state. The couple also gives regularly to the State Center Community College, KVPR, Valley Animal Center, Fresno Philharmonic and Fresno Filmworks.

The Doumanians have also been very generous with their time. Jacqueline is the earliest and longest-serving member of the College of Arts and Humanities Advisory Board. She also serves on the Armenian Leadership Council, the President’s Commission on the Future of Arts and Humanities, and is a board member for KVPR and the College’s Center for Creativity and the Arts. She previously served as the community relations specialist for CSU Summer Arts.

For her contributions to the arts community, Jacqueline was presented the Horizon Award in 2010 from the Fresno Arts Council.

Although Raymond doesn’t like to serve on boards and committees, he works tirelessly behind the scenes. He was pivotal in raising $200,000 for the University, and continuously supports the College of Arts and Humanities’ annual Arts in Motion, which benefits the Dean’s Council Fund. Raymond also calls those who donate to the College of Arts and Humanities to thank them personally.

When asked what has motivated their philanthropy, Raymond said, “I think the reason [being] the families we came from, being [the] first college graduates from our respective families. And we were able to work in the fields at $1 an hour and pay for our education, which isn’t [possible] now. We want to help students to have the same opportunities that we had.”