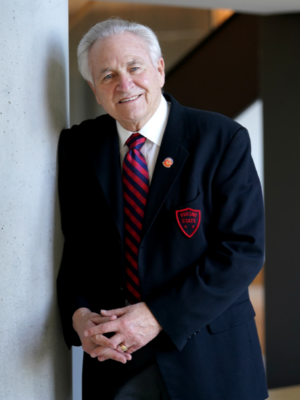 California State Senator Jim Nielsen keeps his Sacramento office filled with Bulldog memorabilia, including his shot put and discus from Fresno State with a photo of the University’s 1964 College Division national championship track and field team.

Nielsen said, “I placed fifth in the nation. I placed third in the West Coast Relays and in the CCAA conference. I was very small, 185 pounds…What I learned was so important…athletics was really where I learned how to compete to win, how to lose with grace and how to push hard to overcome obstacles. Athletics meant the world to me. The camaraderie of that team meant a lot, too. I was blessed to compete on the first national championship team in Fresno State history and for Dutch Warmerdam and Red Estes.”

After graduating from Fresno State with a bachelor’s degree in agricultural business in 1967, Nielsen worked as a foreman on a 33,000-acre ranch and operated his family’s cattle, field and row crops. He later founded a company that made fuel from rice hulls and rice straw.

“I was [in my] early 20s…I had nothing to say that I had done or was doing or aspired to do in leadership, so I said, ‘I’ve got to get going.’ I began to get active in my industry nationwide. I was “National Agricultural Spokesman of the Year,” and I also then began getting involved in community activities…I was developing my leadership skills and developing my communication skills…and then about age 33, I had a really good position, I was making good money but I wasn’t satisfied…and I decided that I wanted to run for the State Senate.”

Senator Nielsen was involved in the revision of California’s master plan of higher education, “which defined the mission, goals and relationships of the three levels of higher education.” He said revising the master plan is one of the things he is most proud of, as it allowed for him to give back to Fresno State and the CSU system in an impactful way.

In 1992 Nielsen was chosen by Governor Pete Wilson to be chairman of the California Board of Prison Terms, where he served until 2007. Then in 2008, Nielsen was elected to the State Assembly.

Nielsen was reelected to the State Senate in 2013. He serves as senator for District 4. Some of Nielsen’s successes as senator include: creating California’s rainy-day fund, co-authoring the Victims Bill of Rights and Marsy’s Law and securing funding for Sites Reservoir in Colusa County.

Nielsen has also worked to help constituents recover from different disasters, including the Camp Fire in 2018, among a series of other wildfires, and the Oroville Dam Spillway.

In 2012 Nielsen was awarded Fresno State’s Presidential Medal of Distinction from John D. Welty in recognition of his leadership.

“A leader is one who makes a difference. But leadership is a function of having the courage to make a decision and accept the consequences of the decision…I really care about people, and if I can do little or great things to make their lives better, that is so satisfying…and that's what I enjoy most about my public service: making a difference in other people's lives. The little things that I, and the people that work with me, do every day serving 1 people. That’s enormously gratifying. And to be able to do some substantial things to give back to that higher educational institution that made such a difference in my life, that's just a wonderful, deeply emotional feeling.”